Characteristics of deforestation in Mato Grosso Amazon in 2020 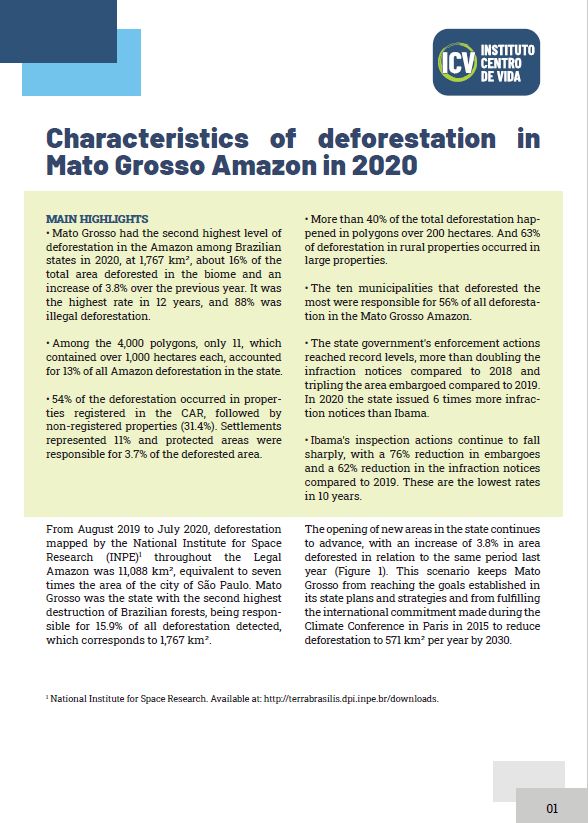 From August 2019 to July 2020, deforestation mapped by the National Institute for Space Research (INPE) throughout the Legal Amazon was 11,088 km², equivalent to seven times the area of the city of São Paulo.

Mato Grosso was the state with the second highest destruction of Brazilian forests, being responsible for 15.9% of all deforestation detected, which corresponds to 1,767 km².

The opening of new areas in the state continues to advance, with an increase of 3.8% in area deforested in relation to the same period last year. This scenario keeps Mato Grosso from reaching the goals established in its state plans and strategies and from fulfillin the international commitment made during the Climate Conference in Paris in 2015 to reduce deforestation to 571 km² per year by 2030.

• Mato Grosso had the second highest level of deforestation in the Amazon among Brazilian states in 2020, at 1,767 km², about 16% of the total area deforested in the biome and an increase of 3.8% over the previous year. It was the highest rate in 12 years, and 88% was illegal deforestation.

• The ten municipalities that deforested th most were responsible for 56% of all deforestation in the Mato Grosso Amazon.

• The state government’s enforcement actions reached record levels, more than doubling the infraction notices compared to 2018 and tripling the area embargoed compared to 2019.

• In 2020 the state issued 6 times more infraction notices than Ibama.

• Ibama’s inspection actions continue to fall sharply, with a 76% reduction in embargoes and a 62% reduction in the infraction notices compared to 2019. These are the lowest rates in 10 years.